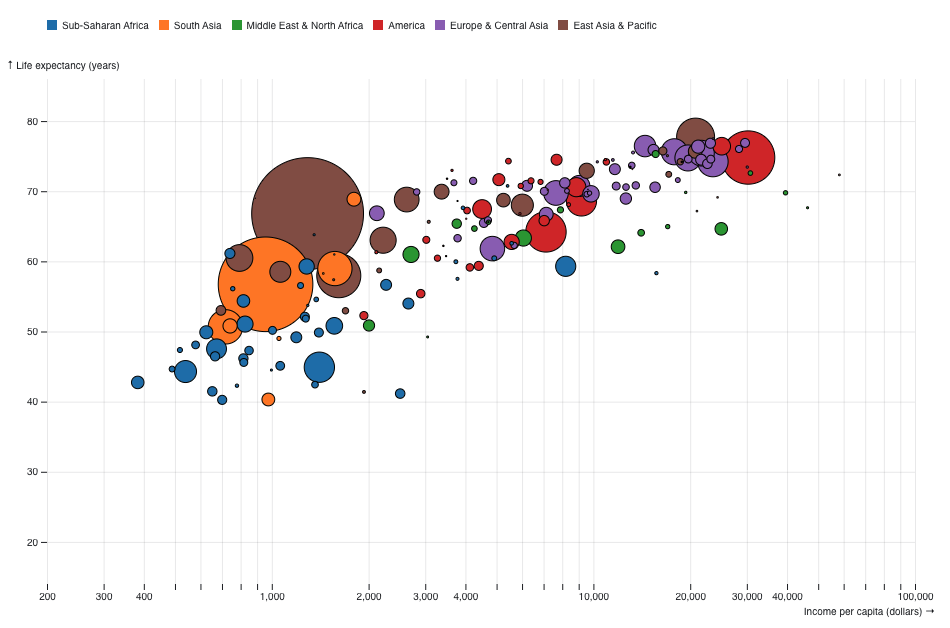 The aim of this article is to itemize key criteria that can be used in determining the overall quality of visualizations in accordance to well researched principles and laws. This will form a framework by which the standard of a visualization design can be examined. A portfolio of visualisations that focus on Climate Change was assembled and evaluated using these criteria and recommendation where required are given based on examination.

The data-ink ratio is the proportion of Ink that is used to present actual data compared to the total amount of ink (or pixels) used in the entire display.

Data-ink should draw the user’s attention to the main point and crux of the data, not to anything else that is irrelevant to it.

Tufte posited through the Visual Display of Quantitative Information, that the most part of ink on a graphic should present the “sense and substance” of the data. Tufte’s principles related to data-ink ratio includes:

Most importantly, show the data; Data-Ink ratio should be high; Minimize and get rid of non-Data-ink.

Tufte in his book, Visual Display of Quantitative Information, opined that “Graphical excellence begins with telling the truth about the data”. Tufte further went on to itemize two principles that enhance Graphical Integrity:

Gestalt principles are rules of organization of perceptual scenes. Gestalt in literal terms means “Unified Whole”. The principle suggests that people tend to organize visual elements into groups when certain principles are applied.

These are visual properties we notice unconsciously and without much effort. It is processed in the spatial memory, usually in a split second. A visualization should call attention to and emphasize the most important part of the information and also create a visual hierarchy of the data.

The book Information Visualization: Perception for Design, written by Colin Ware defines the four pre-attentive visual properties as follows: Color, Form, Movement and Spatial Positioning. In Colin Ware’s words: it is easy to spot a single hawk in a sky full of pigeons, but if the sky contains a greater variety of birds, the hawk will be more difficult to see. It is therefore important that visualizations should ensure the most important message needed to be passed across to the viewer stands out and doesn’t compete for attention with less important ones.

A visualisation must represent data using the right chart. The choice of chart and chart selection must be appropriate for the dataset. A visualization should put into consideration certain factors when selecting a chart, like the data type, intended audience demographic, and

In the book Data Visualization: A Guide to Visual Storytelling for Libraries, in a bid to stress the importance of Visualization Selection, it was pointed out that data being visualized may have properties that do not match well with a particular chart type, which may make it challenging to read.

Chart 1: Wildfire incidents in America in a 30-year period#

The chart shows the total wildland fires and acres affected from 1990 to 2020. The chart compares the wildland fires events and the extent of damage, in terms of acres burned over a 30-year period. The visualization was designed by Visual Capitalist for the general public.

• Layout is hard on the eye

• Use of highly invasive colours

• Use of unnecessary icons on chart

• Sub-header is deemphasised with a smaller font size

• Use of annotations to signify important events over the trend

I have redesigned the visualization to better represent the data through the following steps:

Chart 2: The cold winter of 2010 means climate change is not happening#

The chart below is a pie chart that shows the different opinions of people regarding the assertion that a cold winter is evidence of non-existence of climate change. The Graph was designed by Carbon Brief, a UK-based website that covers development on climate science and policy. The chart is intended for the general public.

• Good use of background colour – white.

• Principle of Simplicity: No sort order to pie chart (biggest to smallest)

• Unnecessary use of 3D graphic. Pie charts are inherently two-dimensional

• Legend is distracting, as its forcing reader to alternate between it and the pie chart.

• Wrong use of chart. A Bar chart would be better

If alternative charts cannot be used to better represent the data, then the Pie Chart can be presented in a much better way. I redesigned the visualization using the following steps:

Alternatively, A Bar Chart should be used to better visualize the data. Below, I created a new bar chart that uses less invasive colours and well-contrasted colours to highlight those who disagree with the assertion, with a deeper colour to emphasize the potion of the data we want to draw attention to. Also, the human eye is better at comparing bars than pies.

Chart 3: Americans Who Believe the US should work to combat Global Warming#

This graph shows percentage of Americans by political demographic who believe the US should combat global warming. The bar chat illustrates the percentage per demographic in contrast to the citizens political divide. The visualization was designed Climate Desk and intended for the general public.

• The grey background is redundant.

• The colours on each bar are redundant as the x-axis name already show their difference.

• The y-axis values are reductant as each bar on the chart has already been labelled with the percentage values.

• Y-axis labels are proportional and well aligned to each bar

• The percentage labels are inside the bar elements. (Law of proximity)

• Use of contrast to emphasise data values

I have redesigned this chart for better representation, using the following steps:

The chart is a vertical bar that shows change in temperature values in different regions over time. It illustrates the change in ground temperature in Permafrost zones within a decade, from 2007 to 2016. The visualization was designed by BBC for the general public.

• Consistent use of font style

• No unnecessary use bold font

• Values on y-axis are proportional to bar sizes

• Same colour used across all bars

• Bar chart as choice of chart for discrete values

• Good use of colours

I created a new chart that addresses how the above visualization can be better represented, making the following changes:

• Introduce sort order to bars, from highest to lowest

• Add a title that succinctly captures the data representation

In summary, the quality criteria were picked to capture, at a high-level, standard, widely-accepted principles in the Data Science industry, utilized when desgining charts. We have seen in this article how the application on these principles can make charts more effective, while staying visually appealing.